Who would be an HGV driver? Some drivers get reasonable pay rates but have no union to bat on their behalf on working conditions. Haulage companies are short of drivers, but the government will not help with training. To cap it all, some car drivers behave as though lorry drivers are an irritation to be sneered and honked at. 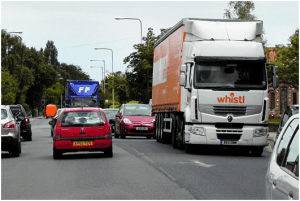 Without HGVs, we wouldn’t get food in the supermarkets and internet shopping would be dead in its tracks. Here we take a brief look at some of the most irritating things on the road, from car drivers to officialdom.

Fully laden, a lorry could weigh 40 tonnes. While your car may be able to break from 70mph in 96 meters, a lorry will need three times this distance. Sudden braking at high speed with a lorry behind you is potential suicide.

Indicating is also important. Approaching a junction, indicate in plenty of time – ideally when you get to the three bars countdown marker. In this way, the following lorry can leave enough gap for when you slow down.

We all hate a tailgater on a country road. Driving too close behind, waiting to overtake, tailgating a lorry is not only irritating but also downright dangerous. As the sticker says, if you can’t see their mirrors, they can’t see you. Make sure your vehicle is always visible to a lorry driver. 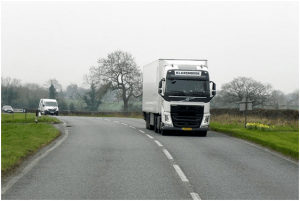 We all get stressed when we see the sign for lane closed in 800m. Do you stick in the left lane, only to see bullies streaming past, pushing in right at the end? Spare a thought for the lorry driver.

Bad driving affects all road users; in fact, a BBC article discusses how it even affects horse riders.

Younger drivers – those under 25 – may find it hard to get into haulage due to the cost of HGV insurance for their employer.

As car drivers, we owe it to other road users to use common sense and show courtesy, especially to the lorry drivers who carry a big responsibility for their long heavy vehicles. Selfishly, we might also consider it could be our parcel from Amazon in that lorry – you go first, mate!

How often have you driven past a motorway service station and noticed that they are out of fuel? It happens more often than you would think and for HGV drivers this can be a nightmare. It will be interesting to see whether the move into electric cars will eventually translate across to vans and lorries as well. The impact of this will be huge with may service stations having to rethink their offering and Tank Decommissioning will become commonplace.