The practical driving test can be an extremely nerve-wracking and frankly horrible experience for many people. You might feel nauseous, have sweaty palms and just feel like you’ll fall apart as soon as you turn the key in the ignition. If this sounds familiar then you are certainly not alone. The current pass rate is just 42% so that’s a lot of repeat tests and even more fingernail chewing apprehension. You might be great at handling a vehicle but the Driving Standards Agency has revealed that most examiners blame a lack of planning and judgment as to the most common downfall.  To plan for your lesson revise the highway code, buy some books on driving, test yourself on the computer with your reaction time and you can even set your garage up with a pretend car, a projection of the road and some garage shelving sourced from sites including https://www.garage-shelving.co.uk to put your scenery on to make it seem more real.  It seems that it is our mental agility on the road that is lacking. Here are the top ten biggest mistakes that are made during the test:

Whether or not you just did something silly due to nerves, so much of the above could be avoided and are the kind of actions our driving instructors had us complete time and again during lessons. 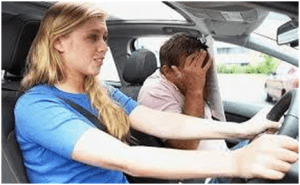 If you’ve had more driving tests than hot dinners then maybe you need a break. Look at the positives in that getting a taxi now and then probably works out cheaper than running a car these days! There have been some quite epic failures like the guy who failed his test because at the start he crashed the car into the wall of the test centre or the unfortunate young lady who clipped a car on the way out of the test centre. However, even examiners can have bad days as one man can testify when he had his test canceled due to one of the examiners hitting their car on a post on their way into the test centre. Then there are the nervous candidates who press the accelerator really hard instead of the brake during an emergency stop or those who exit the test centre on the wrong side of the road! One young lady went the wrong way round a roundabout and managed to get 19 minors, 8 majors and a ‘dangerous’. I guess some people are just not meant to be drivers!